Coming of Age of the Mission Critical Edge

The Mission Critical Edge (MCE) is at a transitionary or “coming of age” stage in its lifecycle. Note that this is a Lynx term that I had coined two years ago. If you see references to “Mission Critical Intelligent Edge”, they really round the same phenomenon. Mission Critical Edge refers to the infrastructure required to design, develop, deploy, and maintain mission critical systems such as avionics, satellites, autonomous vehicles, and critical infrastructure. The mission critical systems are making the transition from being inherently embedded to now requiring the best of both embedded and edge worlds:

Edge
Combining embedded and with cloud connected and dynamic workloads such as machine learning, security monitoring that require immutable virtual machines running next to containerized or bare-metal based applicationsTwo years ago, I predicted that key edge technology and paradigms such as containers and edge to cloud connectivity would be embraced by mission critical systems. This category of systems has traditionally focused on the stability and reliability at the cost of flexibility and connectivity. There were some early signs of adoption of edge functionality at that time, but it has dramatically accelerated in the last two years. 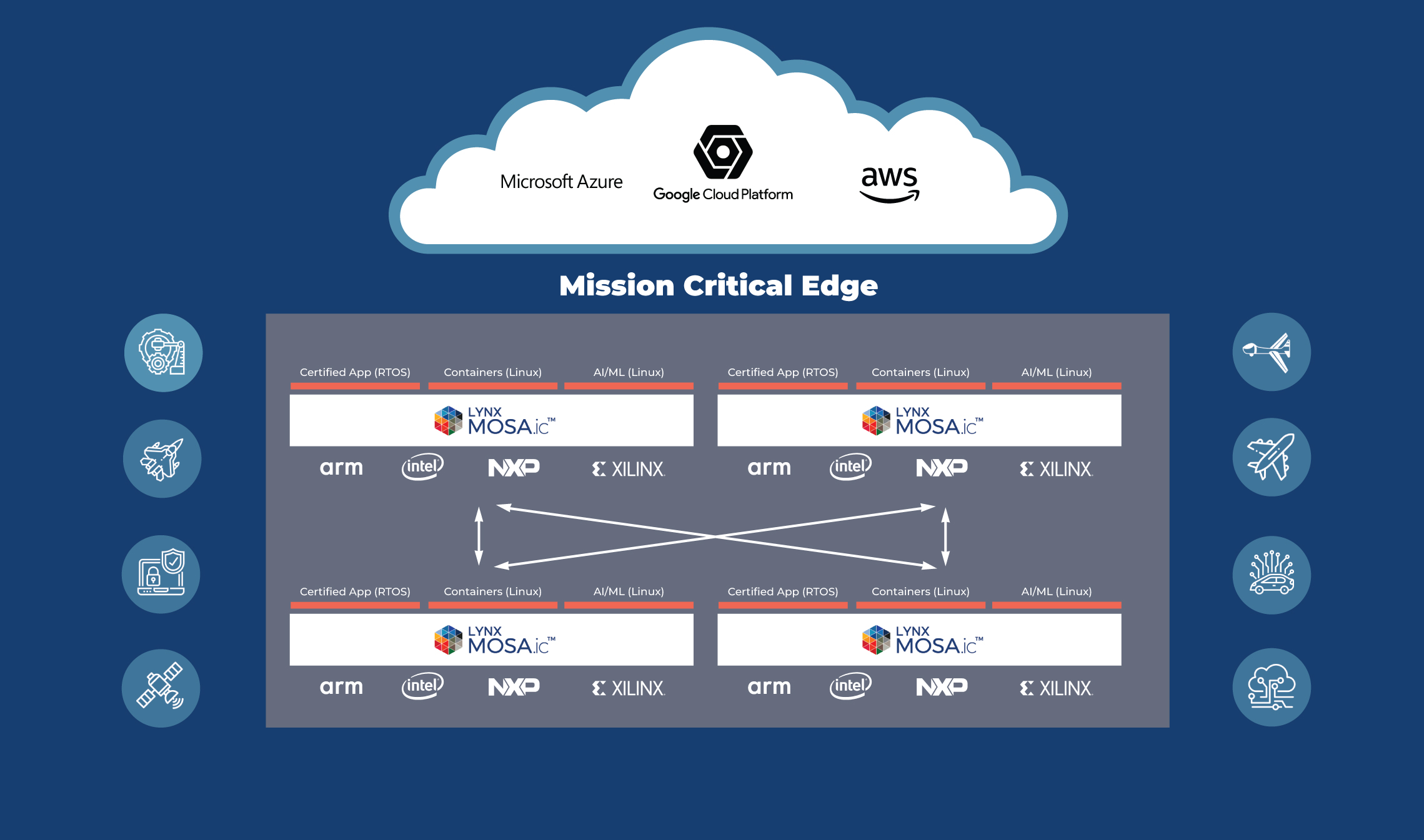 MCE: From Vision to Realization

In researching materials ahead of writing this blog, I reviewed the progress of technology across a range of industries and use cases. I was taken aback by how much has happened in such a little bit of time. 4-5 years ago, we were thinking of a safety critical or a security critical system that would run on a dedicated hardware platform. Additionally, these systems were carefully developed and once deployed, weren't expected to be modified for 10-15 years. In the case of large planes, dedicated teams are typically responsible for maintenance and would have physical access to dedicated equipment and the aircraft in a hangar. Fast forward to today, the use case looks very different. Containers, operating systems, and bare-metal applications are all running on a single hardware system, constantly interacting with other mission critical systems. These systems are being enhanced, updated, and patched over-the-air in an automated fashion without the need of physical human intervention driving accelerated innovation for autonomous systems during development and after deployment. Tesla, for example, is (in)famous for delivering updates to “full self-driving” over the air.

This shift heralds a new era for mission critical systems where, in addition to SWaP (Size, Weight, and Power) and the safety certification, edge capabilities such as adaptability, flexibility and updatability are becoming first class citizens. During this process, system architects and builders have had to reevaluate the design of mission critical edge systems, principally driven by the following factors:

Advent of Artificial Intelligence and Machine Learning (AML)
These systems are transitioning from transducer-driven controllers to sensor-based and machine learning-enabled intelligent autonomous systems. As machine learning algorithms are constantly improving (becoming smaller and more precise), the deployed systems need the flexibility of being able to update the inferencing engine remotely

Software Innovation Acceleration
Software teams have grown and are usually distributed across geographies, sometimes due to internal organization, but many times because of the collaboration across multiple vendors and suppliers.

Systems of Systems
Operationally, these systems are no longer using only local operational data and resources. The systems are expected to leverage data or even compute capability from edge compute connected by 5G, other peer similar mission critical systems, or the cloud. Recently US Department of Defense (DoD) authorized multiple cloud providers (Oracle, AWS, Microsoft) to host Top Secret information which means that tactical systems can now benefit from the scale of the cloud.

Where is MCE Being Deployed?

We are seeing a shift toward MCE across different industries. One key use case for MCE is in satellites, especially since once launched there is no physical access. As a part of the initiative called Satellite One, US DoD is evaluating the use of Kubernetes to rapidly deploy software and machine learning workloads on satellites. The satellite is a perfect example of a system that once launched is not physically accessible for maintenance, upgrades, or fixes. Additionally, the rapid software development mechanism must work flawlessly over the entire lifecycle of the satellite, which can range from a few years to decades.

In May 2022, General Motors and Red Hat announced a collaboration for providing a functional safety-certified Linux operating system foundation for in-vehicle systems. This announcement is significant in advancing the pace of innovation in the automotive sector by enabling continuous functional safety certification. Traditionally, completing functional safety of systems took years and limited the software-driven innovation that can be allowed in the vehicles. With initiatives like this, the mission critical edge is becoming a reality.

Machine learning and the Mission Critical Edge is also becoming a reality on the manufacturing floor. In April 2022, Lynx announced a partnership with Google Cloud that allows a plant operator to seamlessly deploy an inference engine from the cloud directly to the factory production line. This requires that the cloud-connected Kubernetes infrastructure is ready and operating in the production line and withing the space, power, and size limitation that come with the industrial setup. In addition, this infrastructure needs to enforce security while enabling the inference engine to get input from on-prem vision systems and provide insight to the on-prem control systems for action or alert. Lynx has packaged up these technologies and provided a proven solution that can be rapidly deployed on the factory floor or for other mission critical settings such as vehicles, aircrafts, oil and gas pipelines, and renewable energy plants.

Lynx developed the separation kernel technology, LynxSecure, about a decade ago that is becoming the foundation of the modernization of the mission critical edge. Lynx MOSA.ic is a combination of technologies that are built on LynxSecure and provide all the key underpinnings of systems that need to be security and safety certified while still having the capability to leverage cloud connected workloads.

Systems architects, developers, and operators can now confidently create, deliver and maintain systems that meet the stringent real-time, safety and security requirements while leveraging the best of edge and cloud technologies for the mission-critical systems use cases.

Pavan Singh is Vice President of Product Management. In his role, he is responsible for product strategy, product management and product marketing. Prior to joining Lynx, Pavan had 15+ years in product related roles in technology companies ranging from startups to established corporations. During his tenure at Cisco, Pavan helped Cisco and its customers drive innovation by identifying promising marketing opportunities and incubate new business. Most recently, he led product management at Wind River for its open source based IoT edge portfolio. Pavan is also a recognized thought leader and speaker on Internet of Things with a focus on mobility, industrial and enterprise. Pavan is a graduate of Indian Institute of Technology, Bombay and has earned a MS from Texas A& M and an MBA from the Kellogg School of Management.