Single Root I/O Virtualization (SR-IOV) is the complex name for a technology beginning to find its way into embedded devices.  SR-IOV is a hardware standard that allows a PCI Express device – typically a network interface card (NIC) – to present itself as several virtual NICs to a hypervisor.  The standard was written in 2007 by the PCI-SIG (Peripheral Component Interconnect - Special Interest Group) with key contributions from Intel, IBM, Hewlett-Packard, and Microsoft (among others). We can thank the PCI-SIG for the interoperability of the vast range of computer PCI add-in cards and Intel’s famous — in tech circles — 8086 hardware vendor ID that PCI devices report on the bus.

The term Single Root means that SR-IOV device virtualization is possible only within one computer.  It refers to the PCI Express root complex, the core PCI component that connects all PCI devices together.  PCI devices, bridges, and switches are cascaded off the root complex creating a tree structure.  Multi Root I/O Virtualization (MR-IOV) — by contrast — is concerned with sharing PCI Express devices among multiple computers.

Benefits of Virtualization for Data Centers

Virtualization has taken off in cloud datacenters as a means for improving server utilization; that is, putting more software workloads onto a physical server to use up spare capacity.  These software workloads are virtual machines running on top of a hypervisor like Kernel Virtual Machine (KVM), Microsoft Hyper-V or VMware Sphere.  Virtualization reduces data-center power consumption and costs and is a perfect fit for multi-core processors (MCPs) which often run one virtual machine (VM) per core.

Providing network connectivity to VMs on heavily virtualized servers is a challenge.  The hypervisor can share NICs between the VMs using software, but at reduced network speed and with high CPU overhead.  A better approach is to build a single NIC that appears as multiple NICs to the software. It has one physical ethernet socket, but appears on the PCI Express bus as multiple NICs.  Such an I/O-Virtualization-capable-NIC replicates the VM-facing hardware resources like ring buffers, interrupts and Direct Memory Access (DMA) streams.  The SR-IOV standard defines how these hardware resources are shared so that hypervisors can find and use them in a common way for all makes and models of SR-IOV capable NICs. The SR-IOV standard calls the master NIC the Physical Function (PF) and its VM-facing virtual NICs the Virtual Functions (VFs).

So, what has all this got to do with embedded?  The first System on Chip (SoC) with built-in SR-IOV capable NIC was released in 2017.  Collapsing both the physical NIC card and motherboard slot into a highly integrated SoC is perfect for embedded use cases, which tend to be rugged and compact, and where add-in cards and their connectors are a liability.  The Intel Denverton SoC combines up to 16 Atom cores with onboard PCI Express and 4 Intel X550 SR-IOV capable 10 Gigabit Ethernet (GbE) NICs.  Impressively, each X550 NIC includes 64 VFs, for a total of 256 VFs onboard inside this chip.  Combined with an embedded hypervisor, this SoC is an excellent consolidation platform.  SR-IOV enables efficient I/O Virtualization, so you can provide full network connectivity to your VMs without wasting CPU power.  It is well suited to combining separate boxes running RTOS, embedded Linux and Windows-based operator-consoles into one box; saving space, weight and power (SWAP) as well as cost.

This week I setup Lynx MOSA.ic™ on a SuperMicro A2SDi-TP8F board.  This system has a 12 core Intel® Atom® C3858 (Denverton) Processor with 32GB of RAM as well as 4 X550 10 GbE NICs. I used the LynxSecure® Partitioning System to set up the system with 5 VMs — each with 1 CPU core.  I chose Buildroot Linux for all Guest OSs (GOSs) because Linux includes Intel’s SR-IOV capable ixgbe driver.  In Lynx MOSA.ic™ I assigned the PF to one VM, and VFs to the other 4.  It is important to boot the PF VM first, because it is used to create the VFs. Only once they are created should the other 4 be booted. Sure enough, the 4 VFs came up as completely normal NICs.

SR-IOV is a powerful hardware feature for efficiently sharing PCI Express devices — especially ubiquitous ethernet devices — between VMs in virtualized embedded systems.  Integrating the PCI Express bus and SR-IOV NICs into one piece of SoC silicon is a game changer for compact and rugged embedded use cases.  Lynx expects to see increased SR-IOV adoption as embedded systems are consolidated onto multi-core processors. 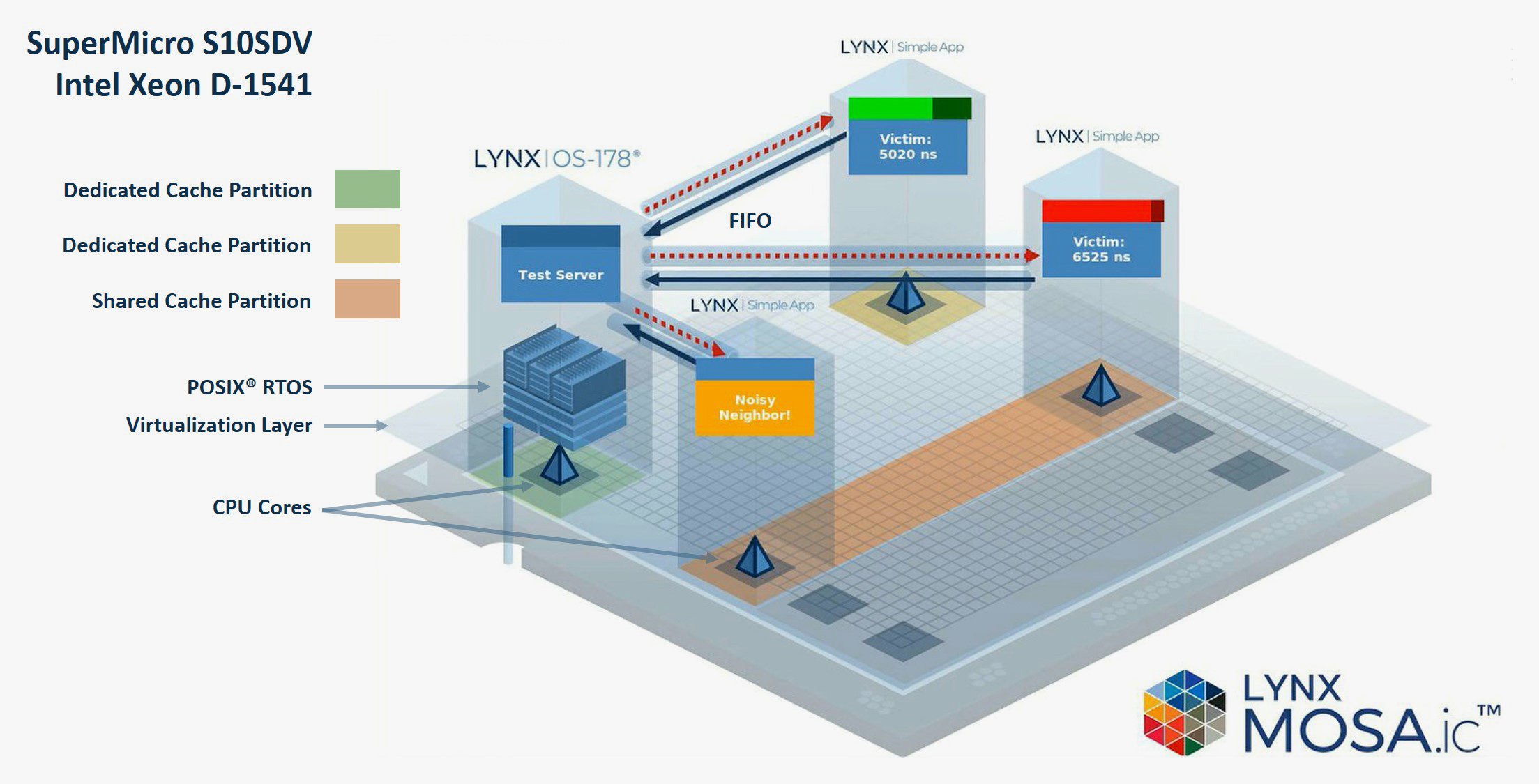